Minutes of Meeting of Directors Form

Create Your Board Minutes Instantly. No Lawyer's Fees. 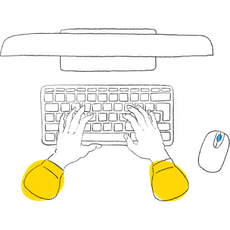 Type in your details

Download the template and enter your board meeting minutes. 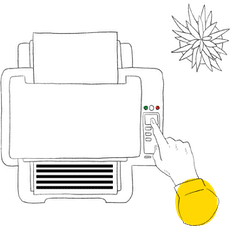 Print your completed Minutes of Directors Meeting document, ready for signing. Or set up for signing online. 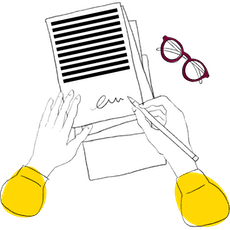 Sign-off and you're done!

Arrange for the chairperson (or all directors) to sign-off and you're done! 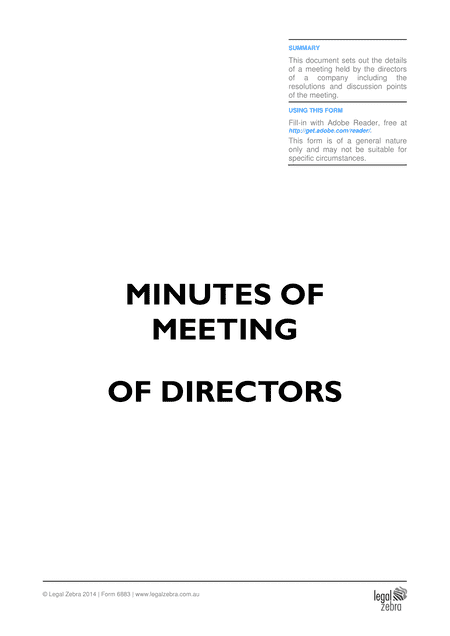 Write your Board Minutes in minutes, not hours

With our downloadable Minutes of Meeting of Directors, you can get your Company Minutes in black & white instantly. 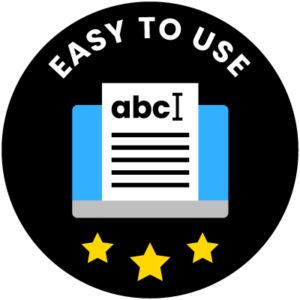 The Legal Zebra Template guides you through the process, so you can confidently record your minutes with a formal, yet easy to follow, document. 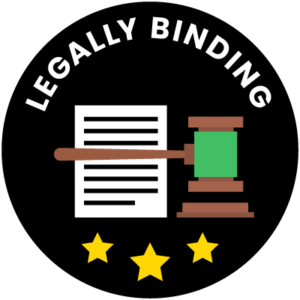 You'll avoid "legal overwhelm" and lawyer's fees and at the same time ensure your company Minutes are professionally recorded. 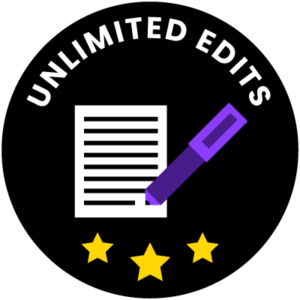 We supply the template in both Word and PDF formats so you can be sure it works on all devices, including Mac and PC, and make all the edits you need. You can even insert your company logo in the Word version. 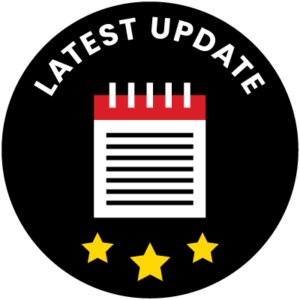 The template we use to generate your customised Legal Form is up to date and effective throughout Australia.

Legal Zebra was a great tool for exactly what I needed!

The will was very quick and easy, and when I had billing issues, they were resolved very quickly! <br>

Customer service is flawless. Thanks Shanti!

What a great platform! As a small business owner I needed 1 or 2 documents and these were all easily accessible, affordable and made sense without any legal jargon! Thank you for a great service offering.

This is a great platform, extremely affordable and a simple process. The service could not be more efficient. Thank you Shanti!

Legal Zebra was a great tool for exactly what I needed!

The will was very quick and easy, and when I had billing issues, they were resolved very quickly! <br>

Customer service is flawless. Thanks Shanti!

Who uses this Directors' Minutes template?

Directors resolve to enter into an important contract

We have agreed that our company will enter into an important contract to develop the land it owns. We want to record why the directors made this resolution and how the directors voted.

We need a simple document to note the decision of the directors to issue new shares in the Company. We want to record the issue of shares in the Minutes of Meeting of Directors so that it is legally effective and complies with the Corporations Act.

Resolving to appoint a new director

All of the directors of our company want to appoint a new director. We need a formal resolution to do this. We want a simple template to record the decision made at our last board meeting.

Checklist - What's included in the Minutes of Meeting of Directors Template?

The template provides space for the Chair of your meeting to sign off on the Minutes as an accurate record of the meeting.

Include details of the company's legal name and registration number. That is, the Australian Business Number (ABN) or Australian Company Number (ACN) to properly identify the company in your Minutes.

Date of board meeting

Insert the date your directors' meeting, also known as a board meeting.

Insert in your Board Minutes where the directors meeting occurred. In some cases, this may be an online video meeting (e.g., via Zoom) or by telephone. That's very often the case since COVID-19 struck.

Insert the name of each director who attended the meeting as well as any apologies from absent directors.

Resolutions passed by the Board

In this template, you can record details of the resolution, and discussion points, of the Directors' Meeting (also known as a Board Meeting).

What are Board Minutes and why do they matter?

What are "meeting minutes" and "board resolutions"?

Put simply, "minutes" is the word used to describe a written record of a decision. This is different from an agreement because it's a record of an internal decision made by the directors of a company, rather than an agreement the company has entered into with a third party.

"Board minutes" are named as such because they are minutes (determinations) made by the board of directors of a company.

A "resolution" is another way of saying a determination or affirmative commitment to do something, as in "the directors resolve to issue new shares/approve the transfer of shares/appoint a new director/or [whatever it might be...]."

If your company has more than one director, you should record minutes of the directors' meetings (board meeting).

Every company must take minutes of meetings at least once a year including a solvency resolution. It’s not only a part of good corporate governance, it’s a legal requirement.

In Australia, companies have a duty (under section 251A of the Corporations Act 2001) to record proceedings and resolutions passed at directors and members meetings.

Generally, resolutions relate to important issues such as changes to the board or share capital and these should be recorded in the minutes of meeting.

“A minute that is so recorded and signed is evidence of the proceeding, resolution or declaration” -- the Corporations Act.

When to use Legal Zebra's Minutes of Meeting of Directors Template

This Minutes of Trustees' Meeting Template can be used for most Australian trusts, including trusts with personal or corporate trustees.

You can use Legal Zebra's downloadable Template to put legally effective Minutes of Meeting of Trustees in place, instantly.

A good time for the directors to get help from a lawyer?

This Minutes of Trustees' Meeting Template can be used for most Australian trusts, including trusts with personal or corporate trustees.

You can use Legal Zebra's downloadable Template to put legally effective Minutes of Meeting of Trustees in place, instantly.

Use this Minutes of Director's Meeting template to keep a record of the board's important decisions.

Talk to a corporate lawyer who won't bore your Board.

I‘ve made this Minutes of Meeting of Directors Template easy to fill-in and understand. It’s designed so you can get your Agreement in black & white without seeing a lawyer.

You can contact me if you have questions or would like professional assistance customising the basic Minutes of Meeting of Directors Template to suit your requirements. 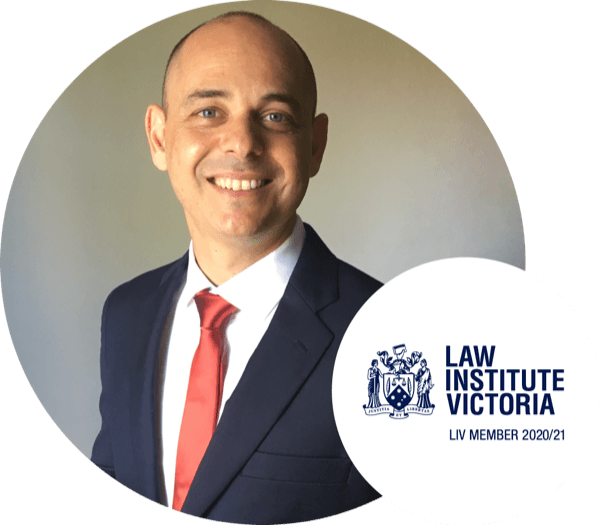 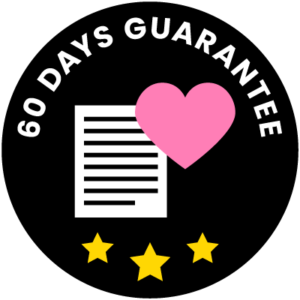 We are confident you will absolutely love our Minutes of Meeting of Directors Template, for your company, because it's beautifully simple to complete and well laid out.

But, if the Template is not right for you then email us to claim a 100% money back refund. Do this at any time within 60 days of purchasing the template. We'll happily refund you.

When you make a Directors' Meeting Minutes, it's a good time to consider these other related documents: 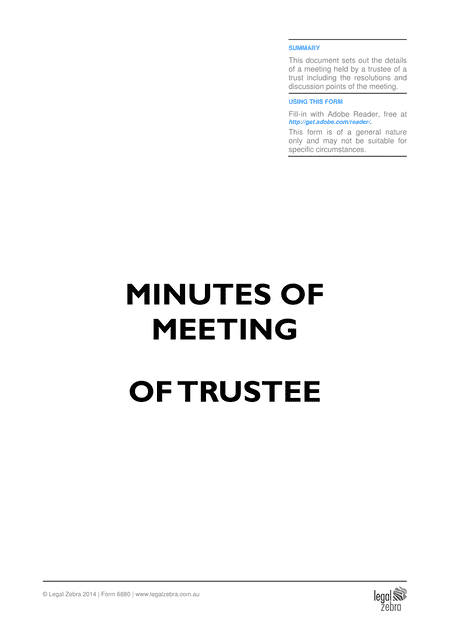 Minutes of Meeting of Trustees Form 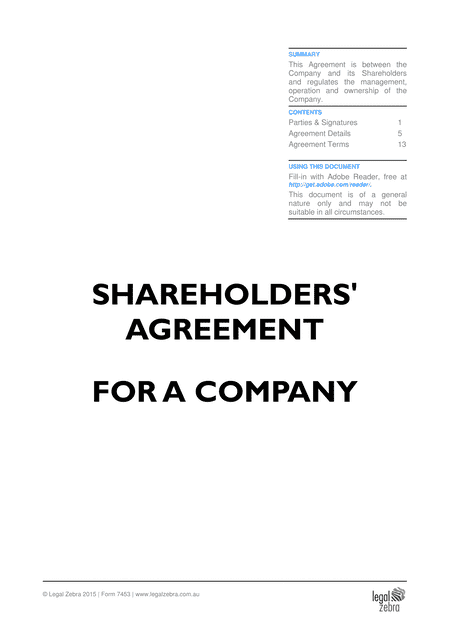 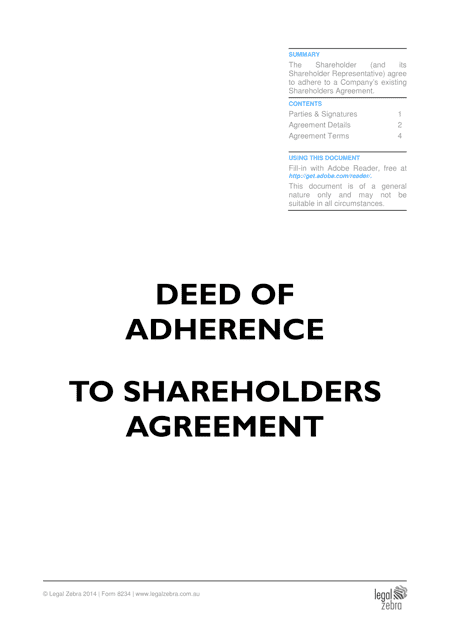